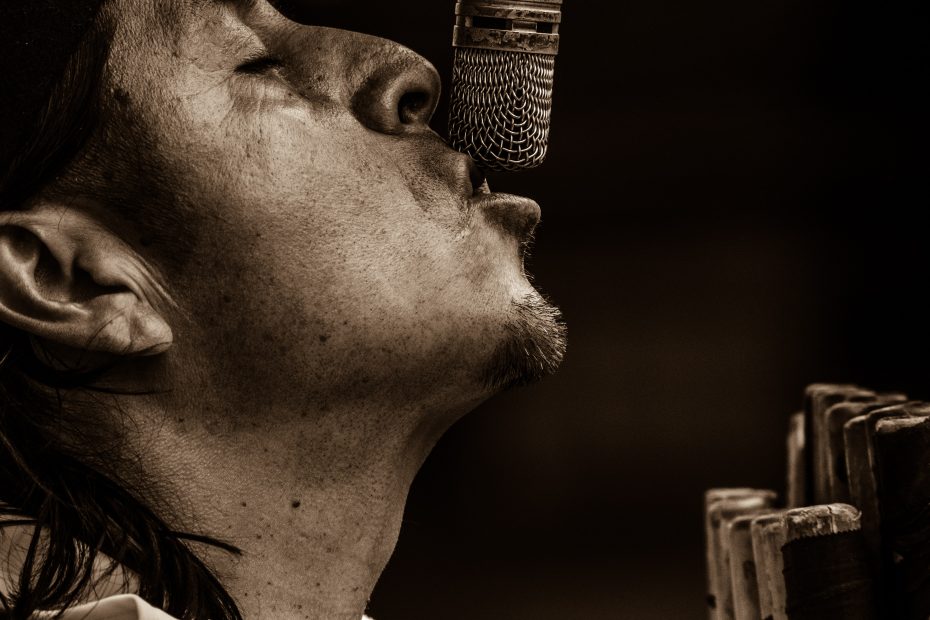 What is vocal distortion?

Distortion is a ‘noise’, an effect that can contain a range of emotions from aggression to devotion. The more a sound is distorted, the more ‘noise’ and the less tone there is. But generally speaking distortion is often used in connection with a note. Sound qualities like rasp, growling, grunting, squeaking, and hoarseness, are distorted and need specific techniques to be done without damaging the voice. It is important to start slow and careful, and to use it wisely and not always, otherwise you might get to a point where you can’t sing without it anymore.

How is it created?

Distortion takes place at the level of the false vocal folds (ventricular folds). These are not the true vocal folds/cords that create sound when breath flows against them, but  a second pair of vocal folds protecting the normal ones from frictional damage during phonation. The false vocal folds consist mostly of fatty tissue, and of mucous glands that lubricate the real vocal folds, so basically smoothens them out and makes them slippery.

A laryngoscope is an instrument for examining the larynx that was invented by Manuel Garcia and revolutionized the research on the voice greatly.

Some people have the ability to squeeze the entire larynx tightly enough to bring the false vocal folds into contact, producing a raspy, rattling sound that e.g. resembles the voice of the jazz musician Louis Armstrong, the rockstar Janis Joplin or heavy metal singer JINJER, and also appears in Throatsinging  The Hu.

The ‘noise’ is created by vibrations of the false folds. The false folds do not vibrate as fast and delicately as the true folds and therefore only  produce a distorted sound. The distortion takes place above the true folds which means that you can add lots of volume to this effect without damaging the voice. Through modifying the volume, pitch, amount of air, mouth position etc. distorted sound can go from sexy growling to deathcore screaming and from Tibetan throat singing to grunting. Looking into the hard rock and heavy metal genres, growlers make sharp distinctions between the various sounds.

The words high, middle and low in hard rock and heavy metal, often have more to do with the timbre of the voice and not the pitch.

There hasn’t been much research done in this area so it remains unclear if distortion sounds are generally created by the same vocal technique. Voice experts warn that the distortion effects can damage the vocal cords, but if distortion is the sound you are aiming for, don’t be afraid to try it! You have to be careful but at the same time explore your voice and try things! I am more the Christina Aguilera, Louis Armstrong kind of growler so don’t really know a lot about the heavy metal, hard rock growling techniques and styles, but I know for sure that many things in singing are learned by imitating sounds you like, and listening to your body!

Pain is never good! As soon as it hurts, feels scratchy, itchy and strained, you are doing it wrong and should stop immediately!!

Questions you can ask yourself when it hurts:

Some people have a natural rasp. It is something that can be genetic and has to do with your anatomy, which you can not really change. So if you are a `raspy voice´ person, embrace it, work with it and make the most of it. The raspiness can become a characteristic of your personal style.

Some people have a raspy voice because they have damaged it through over usage, straining, misuse and drug use. In case you use drugs, please try to say no to them – it’s not good for your health and damages your voice. Overuse of the voice is another pretty common problem, don’t forget to take breaks! Don’t force it!!

For the people who don’t have a raspy voice, I would recommend accessing it through whispering, clearing your throat or coughing. These are things are all not good for the voice. But we are talking about distortion, so you can throw the singing book out of the window anyway. If distortion is the desired sound , try it and explore it, and remember to be careful.

Exercise: How To Growl